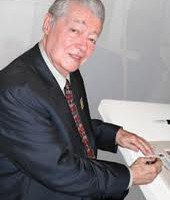 Murphy Anderson, a true Southern Gentleman born in North Carolina, has enjoyed a distinguished career spanning from World War II to the 21st century. Murphy began drawing for pulp magazine Planet Stories and comic books at Fiction House in 1944, then took over the daunting art chores on the Buck Rogers comic strip from original artist Dick Calkins in 1947. Three years later, lucky for us, he re-entered the comic-book field, working at various times for Pines, Marvel, St. John and Ziff-Davis. Though he had some training at the renowned Art Students League in NYC, Murphy honed his chops the hard way—through the panels. But when he joined DC in 1950, Murphy Anderson embedded himself in comics history–and about a hundred million childhood memories. Working on Atomic Knights, Batman, Adam Strange, Hawkman, Green Lantern, Spectre, Superman and more, Murphy’s graceful, clean line work over giants like Carmine Infantino, Gil Kane and of course, Curt Swan, became and remains a high watermark of embellishment in the industry. (Few penciller-inker teams ever earn their own moniker, but the name “Swanderson” is known by every Man Of Steel aficionado.)

Murphy even unintentionally revolutionized the industry in the mid ‘60s. After asking DC production manager Sol Brodsky if he could draw his pages at a smaller, more efficient size instead of the then-standard “twice-up”12”x18”, Brodsky liked the idea so much he made it mandatory for all DC artists. Other publishers soon followed, and the 10”x15” size suggested by Murphy remains the standard today.

For many, Murphy’s inked and/or pencilled versions of Adam Strange, Hawkman and Superman remain definitive. (The Encyclopedia Of Comics calls Strange, “The slickest, prettiest, and best received science fiction strip of the era.”) Both fan and pro alike can spot his distinctive work a mile away. His exquisite line and detail are hallmarks of a style that exemplifies professionalism and grace, just as the man exemplifies professionalism and class in his field.

One would have an easier time finding a perfect 10.0 copy of every comic Murphy has inked than finding a job of his that looks rushed. His work is as refined as his appearance is dapper. He may not draw his likeness into his stories, but Murphy Anderson has drawn himself into the history of comics as well as his readers’ heartfelt memories. He’s earned every bit of his legendary status.